Monsters from the Companion Set

Beholder: A staple of D&D and its variants at high levels of play. In Kaelaross beholders are associated with Bhael and have come through Chaos Portals from planes of Chaos influenced by Bhael.
Blast Spore: I'm not sure if the AD&D gas spores were a good idea, and I have my doubts about this translation into BECMI D&D. I would say they are not native to Kaelaross but could be summoned if the DM chooses.
Dolphin: Although not strongly lawful, dolphins sometimes find themselves at odds with chaotic sea creatures and are famous for helping humans who have fallen into the water. They are found in seas and oceans all around Kaelaross, including the Walrus Channel and around the coast of Teiglin and the Godsblood Straits.
Dragons, Large and Huge versions of the six main colours. Definitely found dotted around Kaelaross, though not common. As described in an earlier post about dragons..
Dragon Turtle: Already established
Drolem: A very powerful construct. The students of Gerontium would love to get their hands on the formula for creating one of these. The Cynideans reputedly found and recorded this formla but it was lost when their civilisation was buried under the sands of the desert.
Gargantua: These variants of regular monsters are a matter of Chaos and mutation rather than human wizardry. Gargantuan trolls, ogres, minotaurs and hellhounds have been seen around some chaos portals, especially the ones in Aerisport and Maquosmouth
Gremlin: Surprisingly low level for the Companion set. However, these chaotic imp-like critters have originated from the Planes of Chaos, through Chaos Portals and have now spread out over Kaelaross, including civilised places such as Ironmarket, the Sterin Barony and Thaldion in Teiglin.
Golem, Mud: Added to the range of constructs controlled by the Students of Gerontium. Mud Golems are often used for patrolling the Maquos riverbed and estuary.
Golem, Obsidian: Possible, but unremarkable. Most mages creating constructs find other types more interesting or effective.
Grab Grass: As it does no damage, Grab Grass by itself is just an annoyance. Hoever, combining it with other creatures (particularly airborne, missile-using or otherwise avoiding the grass) it can be a nasty part of an ambush or set encounter.
Haunt: All three types are powerful undead intended to challenge high-level characters. Also given their natures, it seems better to say they are found occasionally, but do not have any specific ranges or habitats, although areas where other undead are found is more likely.
Malfera: These semi-demons come from one of the lower planes of Chaos and only rarely emerge from the Chaos Portals.
Manscorpion: Believed to have originally been a splinter-faction of the Cynideans who followed a chaotic god, possibly Slargor. When they were chased into the desert by other Cynideans angered by their bloody worship, Slargor turned them into manscorpions so that they could survive in the desert even when their former culture collapsed.
Manta Ray: These warm-water fishes are not normally found around temperate Toutus, but are more common around Bellenos including Tekhumis.
Mujina: These masters of deception are the creations of Pelepton. Though they have originated on the Planes of Chaos and emerged from Chaos Portals, they have spread out and infiltrated human society. They have been encountered in many different places, including the Walrus Freehold and Tekhumis.
Phantom: These three types of undead (Apparition, Shade and Vision) are all powerful and dangerous enough to rival vampires.
Rock or Cave Toad: This would have been better in either the Basic or Expert set as it is fairly low level, though it's hypnotic gaze sets it apart from more conventional giant toads. Colonies are found in pools, streams and rivers across Toutus (particularly the Twisted Hills) but not Bellenos - it prefers Temperate and Subarctic climates.
Shark: This is an entry that was in the Cook Expert set but not the Mentzer Expert set, so it was included in the Companion set. All three can be found in the seas of Kaelaross. The Great White and Bull Shark prefer warmer waters, while the Mako can be found along the coast of southern Toutus including off the shores of Teiglin and the Godsblood Straits. The Walrus Channel has its own type of shark, the Arctic Shark, that has the same stats as a Great White, but only moves at half the speed (90').
Snow Ape: These chaotic primates are found on high mountains, particularly those with glaciers and snowy caps. There are populations in the Grulven Mountains, the Cortacus Mountains and even some reported in the Valhorrian heights in Klantorr Island.
Spectral Hound: Since the "Dimensional Vortex" is not part of Kaelaross' cosmology, I'm not sure if the spectral hound fits into Kaelaross. If you swap the "Dimensional Vortex" with the Ethereal plane, then Spectral Hounds become more usable.
Spirit: The three types of spirit (Druj, Odic and Revenant) are intended to be even more powerful and challenging than the other types of undead (the Phantom and Haunt). While I would not exclude them, I am not sure exactly where or how they would fit into Kaelaross.
Weasel, Giant: These vicious predators are found in temperate woodlands across Toutus, including the Shorgan and Talloak forests.
Whale: Like the entry for sharks, this was in the Cook Expert set but not in the Mentzer Expert set. All three (Killer Whale, Narwhal, Sperm Whale) are found around Toutus, with the Narwhal preferring the cooler waters of the Walrus Freehold and Varreshiss Islands. Sperm Whales range widely across the deep oceans, and sometimes swim around the islands that used to be the Bellenos Empire.

Dungeon of the Month August 2012

The Subterranean River Lair
This is a short dungeon that could be added onto the side of a larger dungeon level or on its own. It uses the D&D Basic/Expert rules or Labyrinth Lord and is suited for characters of levels 2-4 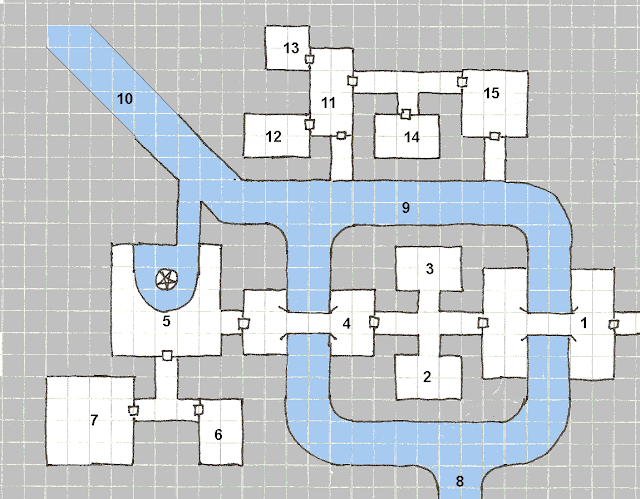 The river flowing through this dungeon is 6' deep (so even humans need to swim to keep their heads above water) and flows at 10' per round. Most borders where stone floor meets the river, the floor of the dungeon is 1' higher than the water level, thus it is relatively easy to climb out of the river if you can reach the edge.

The lizardmen around this dungeon are neutral with chaotic tendancies. They are under the command of a chaotic lizardman priest who is trying to convert the tribe to the worship of Slargor. Killing him would mean the surviving lizardmen becoming disenchanted with worshiping Chaos and drifting back to neutrality.

3) Empty apart from a pair of human corpses in the middle of the room and a scythe trap over the doorway. Anyone entering the room triggers the trap that sends a scythe swinging down at anyone in the doorway. THAC0 10, Dam 1d8+2. It only attacks once, after which the lizardmen have to reset it.

4) 2 lizardmen (hp 6, 11), 2 giant toads (hp 12, 10) guarding the bridge plus 2 giant piranhas (hp 16, 11) in the river. There is a stone bridge across the river.
In the river under the bridge there is a corpse of a lizardman leader who still wears a silver and coral necklace worth 640gp. However, it will take some careful searching underwater (2 in 6 per person per turn) to find the corpse.

8) Upstream mouth - this could lead to other dungeon areas, or it could be blocked off by an impassable iron grill.

10) Downstream tunnel - similar to the upstream end, this could lead to other dungeon areas, or it could be blocked by an impassable iron grill.

11) 1 gelatinous cube (hp 17) is sweeping this room. As the room is dark and the gelatinous cube has nothing suspended in it, it has a good chance to surprise any opponents.

12) Empty, having recently been swept clean by the 'cube.

13) 2 ghouls (hp 8, 6) have been trapped here by the cube and are ravenous. When any humanoid enters, the ghouls leap to the attack at +1 to hit but also +1 penalty to AC (from 6 to 7). In among the debris in the ghoul's room there is a silver tiara studded with 6 peridots worth 1400gp.

15) The Trog Den: 3 troglodytes (hp 14, 7, 10) live here. They are allies of convenience with the lizardmen, though they don't necessarily like each other (the lizardmen think the troglodytes smell horrible, and the troglodytes consider the lizardmen easily cowed). If the lizardmen are losing against PC attacks, then they may regroup here with the troglodytes. The troglodytes have one interesting advantage - the piranhas leave them alone because their offensive odour is detectable underwater, making them unappetizing to giant piranhas.
In the northeast corner of the troglodyte den there is a pile of chewed-up fish bones. Underneath this is a leather sack with the troglodytes' treasure: 1,100gp, 2000sp and 10 gems (3 small magma stones worth 200gp each, 4 jades worth 100gp each and 3 large ambers worth 150gp each, totalling 1450gp worth)