Scenario 3: The Raiders of Guido's Fort


In recent months monsters and humanoid tribes in the hills around Penhaligon have become more active and aggressive, with goblin, orc and hobgoblin bandits and raiders becoming bolder in their attacks on travelers and villages. Lady Arteris of Penhaligon has been sending out patrols of soldiers out to these villages until a week ago when orc raiders were spotted outside the town itself. Lady Arteris has since pulled all her forces back to town in expectation of a major attack by orcs and goblins.
One village in particular is vulnerable to the depredations of the chaotic monsters - Guido's Fort to the north of Penhaligon. Despite the name, Guido's Fort is not well fortified (the name is almost a joke), with only a wooden palisade - its main defence is the fast-flowing Hillfollow river. Some of the villagers call it the River Shrill but few call it that outside the village. The villagers of Guido's Fort are particularly worried about a build-up of hobgoblin and goblin forces around an abandoned monastery  across the river on a small mountain known as "The Hill".
Lady Arteris has asked the PCs to help. A messenger was sent to Guido's Fort but has failed to return and Arteris is concerned for the village, while at the same time reluctant to strip defenders from the town. She asks that the PCs investigate and, if they deem it suitable, deal with any problems the villagers are facing. 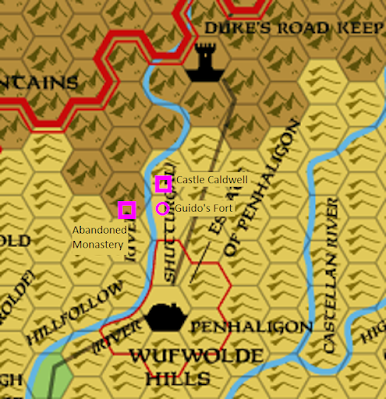 The journey to Guido's fort is 18 miles along the river and not easy - as well as wandering wild animals, there are bands of orcs, hobgoblins and goblins roaming around.
Around the half-way mark the PCs come across the bodies of a horse and rider shot with goblin arrows - this is the messenger sent by Lady Arteris. He made it to the village but was killed on the return journey. He still has his leather armour and shortsword. In his saddlebag is the message:

Guido's Fort is in grave danger from hobgoblins and the like, and urgently requires reinforcements if it is not to be overwhelmed and the people slaughtered. Time is of the essence as we do not know when the final attack will occur. Hurry before it is too late!

Within a mile of the village along the river path there is a roadblock of 4 goblins and 2 hobgoblins who have felled 2 large trees down across the path. They will attack any humans who approach from either direction. 2 of the goblins have shortbows and 10 arrows each.
2 Hobgoblins: AC 6, Mv 90', HD 1+1, hp 4, 6, Att 1 weapon for 1d8, Ml 8, Save F1,  Align C, XP 15 each, leather armour, shield, swords, 3d6sp each
4 Goblins: AC 6, Mv 60', HD 1-1, hp 3, 4, 5, 6, Att 1 weapon for 1d6 (spear or shortbow), Ml 8, Save NM,  Align C, XP 10 each, leather armour, shield, hand axes, shortbow, 10 arrows, 3d6sp each
If the PCs make it through the roadblock to the village, they find it in a desperate situation. There are only 10 militia men left (AC7, F1, hp 4 each, Att 1 spear for 1d6, align N, Ml 6, equipment: leather armour, spear, dagger), plus 70 non-combatants (including women, children and the elderly). Their captain has fled and their sergeant and 12 comrades have been killed. The village is effectively under siege, with humanoid forces cutting off routes of escape in all directions. The goblins have even stolen the villagers' river boats so the river has become a  barrier rather than a route. 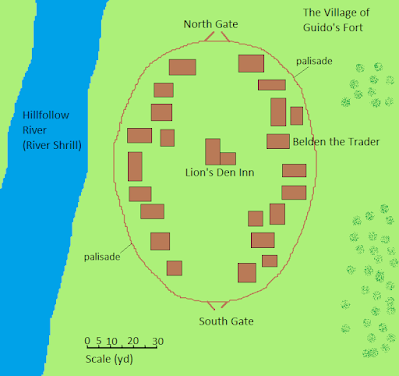 Belden the trader can buy and sell most things under 50gp but for more expensive deals (gems, jewelry etc) he would recommend his friends in Penhaligon, if the PCs can get there.
The Lion's Den inn is still open for business and the PCs can stay there should they wish.
But during the night, an attack is launched. There are 2 squads - one with 6 hobgoblins bearing torches and hollering, banging on the north gate, the other squad of 10 goblins being very quiet, sneaky and using ladders to climb over the south gate. The militia (as the humanoids anticipated) will rush to the north. How this plays out is up to the PCs and DM.
6 Hobgoblins: AC 6, Mv 90', HD 1+1, hp 4, 4, 5,6, 7, 8, Att 1 weapon for 1d8, Ml 8, Save F1,  Align C, XP 15 each, leather armour, shield, swords, 3d6sp each
10 Goblins: AC 6, Mv 60', HD 1-1, hp 3, 3, 4, 4, 5, 5, 6,, 6, 7, 7, Att 1 weapon for 1d6, Ml 8, Save NM,  Align C, XP 10 each, leather armour, shield, hand axes, 3d6sp each
The good news is that if either of the enemy squads are wiped out they leave the river boat (one boat per squad) on which they arrived. If either squad flees the village (failed morale check etc) they will try to take a riverboat back to the west bank.
If the party is strong enough, the villagers suggest crossing over the river and confronting the hobgoblin forces based in the ruined monastery on The Hill. This should lead to module B5: The Horror on the Hill.

If the party is not that strong (perhaps inexperienced or few in numbers), the villagers suggest an alternative. A single-storey castle was built just 3 miles to the north of the village. Named after the eccentric nobleman who commissioned it but then disappeared, Castle Caldwell has been abandoned for over 50 years but right now it seems a more defensible refuge than the village itself. If the PCs could clear monstrous squatters out of it, so the villagers can take refuge there, it would be an improvement on their current situation.
More nobly inclined PCs may try to evacuate the villagers - if they have recaptured a river boat, they can transport 10 people at a time downriver, 4 hours journey to Penhaligon, 12 hours back upstream to Guido's Fort. However, the longer they stay in the village, the more likely further goblinoid raids are, of similar strength to the one on the first night, though perhaps varying tactics.
Posted by John L at 14:29