Dungeon of the Month September 2012

The Copper Mine on the Shore
This is a short adventure using the Basic/Expert D&D rules (or Labyrinth Lord if you prefer) for a party of characters levels 3-4. 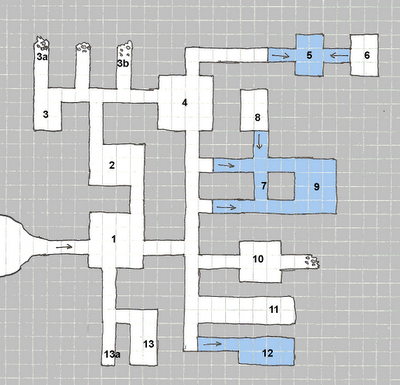 This dungeon is an abandoned copper mine close to the sea shore. It is above the reach of normal tides, but powerful storms and unusual tides will wash seawater and some wildlife into the mine.
The mine was abandoned because of this occasional flooding. That and an invasion of monsters that killed a dozen miners. There are no steps or stairs here because the miners used pit ponies and carts, but there are sloping passages (indicated by arrows on the maps, the arrows pointing down the slope).

1) 8 giant bats (hp 15, 8, 9, 13, 14,7, 9, 5) that will attack any single intruders but will leave groups alone unless attacked. The room has a high arched ceiling, and the bats hang from cracks and ledges up above any characters.

2) 3 dead bodies of adventurers are on the floor. In a niche half-way up the wall in a corner a gargoyle (hp 22) lurks and it will attack anyone entering, preferably when they are distracted by the dead bodies.
The niche has treasure: a chest contains 2600sp, 620gp, a silver and aqumarine pendant worth 600gp, a vial of expensive perfume worth 250gp (don't mistake it for a potion!) and a potion of healing

3) The rotten remains of a pit pony and its cart are here.

3a) This is the lair of a carrion crawler (a.k.a. carcass scavener in LL, hp 17) that will attack any intruders. Anyone who knows about mining will notice that the rubble and boulders in this collapsed passage contain copper ore.

3b) This dead end is structurally unstable (dwarves have a chance to detect this). There is a shrieker (hp 12) here. If disturbed its shriek has a 50% chance per round of causing a cave-in, causing 2d10 damage to all within the area. The shriek will also attract the carrion crawler from area 3a and the gnolls  from area 4. Like 3a, the rocks in this area contain copper ore.

6) 1 magic user (5th level) (AC 9, hp 15, Move 120', THAC0 18 Att 1 dagger or 1 spell, Dam 1d4 or special, Ml 10, Align Chaotic, Int High (14), XP 500).
Spells: Charm Person, Shield, Web, Mirror Image, Fireball
Equipment: Robes, Dagger, Spellbook, Ring of Dimension Door (casts Dimension Door on himself once per hour).
He is an outlaw who has fled civilized lands for his part in a cult of Chaos. He uses a ring of Dimension Door to bypass the crabs and bats, and if a fight is going badly (he kind of relies on the fireball to one-shot enemies) he will try to use the ring to escape, possibly to another part of the copper mine, such as the nagpa in area 11 with whom the magic-user has an understanding if not a proper alliance.
The magic-user has created a cozy den here with a bed with blankets and mattress and a soft armchair (worth 60gp if anyone thinks of salvaging it) and antique carved wooden desk (worth 120gp if salvaged). The desk has a locked drawer with the magic-user's spellbook as well as 320pp and a set of 4 magma stones worth 400gp each.

7) 2 lacedons (aquatic ghouls, hp 14, 9). These look similar to normal ghouls except that they have a cyan-tinge to their skins and have webbing between their fingers and toes. They will fight in the flooded area, and any PC paralyzed by the ghouls will begin to drown. The lacedons are undead, so they do not need to breathe. There is a 1' air gap at the top of the chamber.

8) Pack of 15 giant rats (hp 2 each). These rats will attack any intruders. They guard the lacedons' treasure - a leather sack hanging on a hook out of the reach of the rats. The sack holds 1240gp, four pieces of silver jewelry worth 120gp, 150gp, 60gp and 60gp

9) 1 immature Giant octopus (HD 6, hp 30). This room has no air gap, so drowning becomes even more of a problem for air-breathing PCs. The octopus does not deliberately collect treasure, but a knight of the realm ventured into the mine and was dragged into the octopus' lair by the lacedons. His skeleton is still adorned by plate mail (too chewed up by the octopus' beak to salvage), a shield +2 (adorned with the knight's heraldry), and a sword +1 +2 versus spell casters as well as a mundane dagger and a platinum and spinel medallion around his neck worth 1600gp

10) 3 dead miners with pick axes and buckets scattered around. There is nothing of value or danger here. The narrow part at the far end has a mine face where copper ore is exposed.

11) 1 lesser nagpa, (hp 24) an exile from its tribe. It has an alliance of sorts with the magic-user in area 6. Its magic user spells are Magic Missile, Phantasmal Force, Hold Person. Similar to the magic-user, its lair is furnished, with a brazier with glowing coals, a table with a candelabra with Continual Light cast upon it and a couch (which the nagpa prefers to a human bed). There is a large tapestry, and as long as it is not damaged during any fighting it is worth 220gp. Underneath the couch is a small chest which sits on top of a piece of vellum which has an explosive rune written on it. Reading the explosive rune will cause 6d4+6 damage to all within 10ft radius. Anyone in the blast radius except the reader gets a save vs spells to reduce damage by half.
Inside the chest there is the nagpa's treasure: its spell book (including the Explosive Rune spell, borrowed from AD&D/OSRIC), plus 420pp, 800gp and a circlet of wrought silver and gold worth 1200gp

13) 3 dead miners and a dead pony. There is nothing of value or danger here.

13a) 1 displacer beast (hp 26, phase tiger if using Labyrinth Lord). PCs looking at the walls will notice numerous patches of copper ore in this tunnel.