The Bandits of Shorgan Forest part 2

Part 2 - Finding the Spy in Elfmeet
This follows on from Part 1 where the PCs have escorted a merchant and his cargo through several ambushes that have evaded army patrols.
The spy can't be collecting info as the caravans are leaving (there is no-one else setting off at the same time) - it must be beforehand, so the spy must be operating in Elfmeet, a crossroads town of about 560 people. 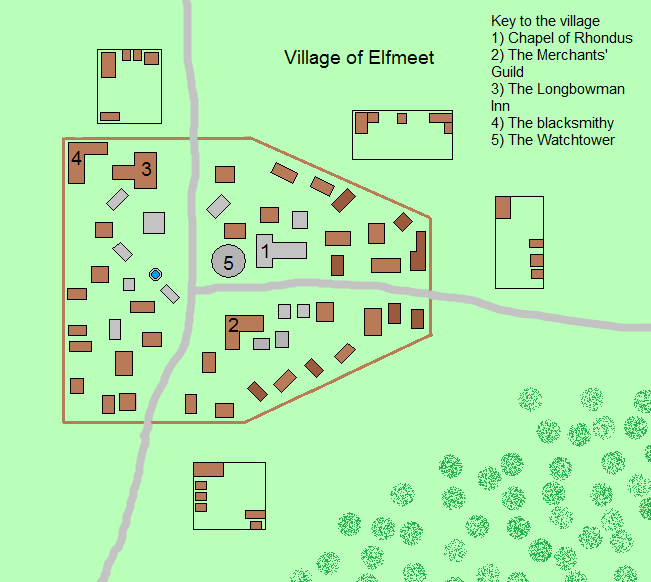 The Merchants Guild requires members to register significant business transactions such as large trades between towns.
The clerk at the Merchants Guild has been charmed by the spy and passes the info on without question
The clerk is Ranulf, NM, neutral, AC 9, Mv 120', hp 2, Att 1 dagger for 1d4, who is normally good at his job and discrete.
The spy is Zendilla (4th level magic user chaotic), an attractive woman who dresses more as a lady than a mage (AC 9, Mv 120', hp 11, Att 1 dagger or 1 spell. Spells include Sleep, Charm Person, Web, ESP)
Asking around town about merchant caravans will get a range of replies:
"Try the local tavern - it's called the Longbowman"
"Try the town guards in the Watchtower"
"Try the Thieves Guild" - a red herring as there is no thieves guild in Elfmeet
"Try the Merchants' Guild"
"Try the Tax Office" (which is actually inside the Merchants' Guild)
The PCs could be given the runaround about town. However, they should end up at the Merchants' Guild.
Ranulf the Clerk will be quite honest and open about passing info on to Zendillia - "It's her hobby - she's very interested in that sort of thing"
Ranulf is both magically charmed and infatuated with Zendillia and will not accept she is involved with banditry.
Zendillia will initially brush off any questioning from PCs or officials, but if the questioning persists she will try to cast a spell (usually Sleep) and make a run for it. She will use sleep if there are a number of PCs but she may try to charm a lone investigator. The tactic of coup-de-gracing sleeping PCs might be tempting, but a bit harsh. If she is able to incapacitate the entire party, the DM can say she just panics and flees.
If the PCs kill her, there will be a commotion and they will be charged with murder - nobody else in the village has suspected her of anything.
If she is captured, she will be co-operative, particularly if she thinks she can avoid a trial.

At her residence there is a map of the local area with marks indicating ambush points between Elfmeet and other local settlements such as Firebright Keep. There is also a symbol that does not correspond to any known settlement. This is the bandits' lair.

Just as an aside - other things may be going on in Elfmeet, and only two out of a possible 560 NPCs have been outlined. If the DM wants to add side-treks or additional adventure hooks in the village, go ahead and expand it as much as you want.
Part 3 - The Bandits' Lair - to be continued...
Posted by John L at 01:14