The Godsblood Straits: Map and overview 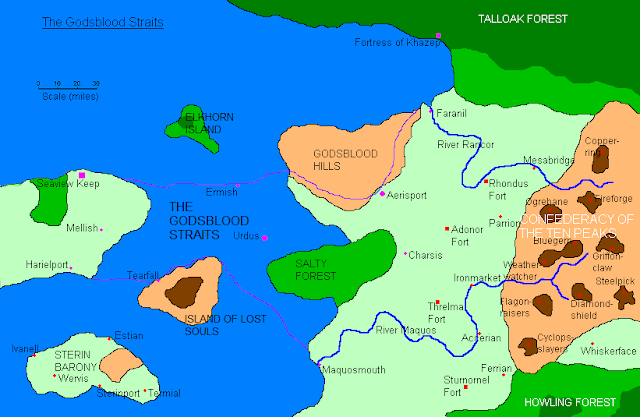 Immediately to the east of the Kingdom of Teiglin is the Godsblood Straits, a channel formed 50 years ago during the Summoning. This area suffered cataclysmic disruption and transformation within a matter of hours as the avatars of three gods fought with all their might above the city of Urdus.
- The isthmus that connected Teiglin to the rest of the continent/empire of Toutus sank beneath the waves, drowning thousands of people.
- Bhael also created a number of Chaos Portals in the region, unleashing a flood of chaotic monsters, similar to the situation in Erkhart, Teiglin's capital
- A chunk of sea bed on the south of the isthmus was pushed up to form a mountainous island - the Island of Lost Souls
- The coastline to the northeast of the isthmus was pushed up and wracked to form the Godsblood Hills.
- The Duchy of Urdus, which had occupied the isthmus and the surrounding area ceased to be a political entity, and the surviving populations have made their own fate
- the forest at the eastern end of the isthmus has been partially flooded, turning it into a saltwater swamp, known as the Salty Forest.
- The River Rancor, which had met the sea at Aerisport, shifted its course and now flows into the sea next to the fishing village of Faranil

There are survivors though, and they are tough and resourceful:
The Sterin Barony, an island barony to the south of the Godsblood Straits, has survived and is now an independent realm (though a small one)
The town of Ironmarket in between the dwarven realm and the Godsblood Strait has become a bastion of humanity and turned into a city.
A number of forts and villages now surround Ironport, protecting it from threats to the west.
The Confederacy of the Ten Peaks is the most powerful realm in the region - an alliance of 10 dwarven clans in the hills and mountains to the east of the Godsblood Straits. Militarily and economically they are relatively undamaged, and only disagreements between the clans stops them from dominating the area.

There are also wilderness areas, mostly unaffected by the disasters of recent times.
The Talloak Forest has stood for centuries just to the north.
The Howling Forest is in the southeast and is reputed to be hunting grounds for wolves and werewolves
Elkhorn Island is immediately north of the actual straits.
Posted by John L at 09:56