For a brief overview of Klantorr Island see the description in the Map and Overview of the Varreshiss Islands. Klantorr was once part of the Toutus Empire, but after the Summoning it has become an independent realm ruled by a Theocracy of the lawful clerics of Rhondus.

Population
Klantorr island has the largest population in the Varreshiss Archipelago, with 45,000 humans and 4,000 halflings. There are a few other races but none more than in the hundreds.

Before the Varreshiss Islands were taken over and incorporated into the Toutus Empire, they were colonised by the Ferdenmen, a human tribe who were adept at sea-faring. Many of the lower classes of Klantorr Island are still Ferdenmen, either pureblooded or mixed with Toutian blood. Ferdenmen are short and stocky for humans, with reddish, blond or light brown hair and fair skin. Ferdenmen are very rarely seasick, so they find other folks' heaving and puking over the side of ships quite amusing.

Settlements
Charventown (population 5,300) is the capital and largest settlement - the only one that can be called a city. It is the heart of the theocracy, and the cathedral that towers over the city is the religious, political and legal heart of the realm.
Guntharn (population 1,400) is primarily a fishing village, though there are miners who set off into the Valhorrian heights every day. Because it is relatively isolated, the Theocracy is not taken quite so seriously here.
Berranport (population 2,000) is the main naval base, as well as a trading and fishing port. Because of its ease of access, Berranport is where a lot of visitors to Klantorr stay and do business.
Pikefish (population 1,900) is a market town for farmers and herdsmen that also serves as a stopover for river traffic passing to and from Charventown.
Hierarch's Retreat (population 1,300) has a country residence for the clerics away from the business and politics of Charventown. The town also has a cell of 5 doppelgangers who have evaded detection so far.

There are other smaller villages and hamlets (of less than 500 people each) dotted around the meadows and plains of Klantorr which are not shown on the map. 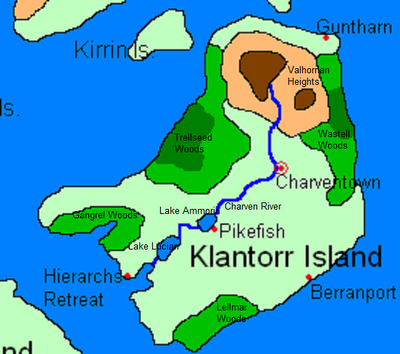 Physical Geography
The Charven River: This is the main artery for Klantorr Island, and it carries most of the trade goods and many passengers to and from Charventown.
Lake Ammorin: With the town of Pikefish on its southeast bank, this lake is noted for its large fish, including giant pike and gar. Not safe for swimming in.
Lake Lucian: High tides sometimes wash salt water into Lake Lucian, giving it an estuarine air about it. Giant frogs and toads are found around the shores.
Valhorrian Heights: A small but rugged area that reaches up to mountainous altitudes in places. There are significant deposits of both copper and tin ore, so miners find this range moderately profitable. There are wild boar, sheep and goats in the hills, while giant eagles and griffons compete against each other on the mountain tops and crags.
Wastell Woods: This woodland is not very safe - bands of both gnolls and kobolds have been encountered here over the centuries despite various attempts to clear them out - perhaps they have hidden hideouts.
Trellseed Woods: This is the largest woodland in the Varreshiss Islands, and it has a range of wildlife, including stags, wild boar, wolves, brown bears and wild cattle.
Gangrel Woods: Although there used to be a problem with kobolds and giant weasels here, the previous barons have effectively eradicated them, making the Gangrel Woods popular with woodcutters, berry pickers and pig herders.
Lellmar Woods: Another patch of woods that has been made safe for human use. However, this has been disrupted by the arrival of a boatload of gnolls who are fast-moving and evasive, raiding small farms and attacking travellers then moving before the Theocracy's troops can respond.

Economy
Klantorr is mostly self-sufficient, and given its circumstances it needs to be. Crops, livestock and fish provide plenty of food, while the tamer parts of Gangrel and Lellmar woods provide a supply of timber for housing, fuel and boat-building. The Valhorrian Heights can be mined for copper and tin, which can be smelted for bronze, but iron, gold and silver need to be brought in from outside. Bronze tools and weapons are therefore cheaper and more available than iron ones on Klantorr.
Klantorr also brews Viskey, a strong alcoholic drink brewed from barley and oats. The Theocracy is generally disapproving of this, though to make it illegal would invite insurrection. This is both popular with the locals and also exports well.

Trade is primarily with the Walrus Freehold. Although the Theocracy does not agree with the cities of the Freehold and their mercentile, materialistic attitude, nonetheless they recognise that trade is necessary. Klantorr can grow crops, fruit and vegetables (particularly on the broad grasslands between Pikefish and Berranport) that won't survive in the harsh cold of the Walrus Channel. In return the Walrus Freehold provides all-important iron (particularly from Najask) as well as ivory and furs.

Though it is further, Teiglin is also a trading partner. Teiglin is warm enough for wines to be brewed, and in return, Klantorr can sell its Viskey in Teiglin.
Posted by John L at 14:46