Borrowing from Magic the Gathering

I'll be honest here: I've always liked MTG's looks, flavour and huge range but I've never really got into playing it. I bought several packs both when it first came out and as various expansions were released, but never got round to finding other people to play it with.
But the pictures were cool.
This article http://www.examiner.com/article/why-isn-t-there-a-magic-the-gathering-dungeons-dragons-crossover explains why an official M:TG /D&D crossover did not happen, but there are plenty of opportunities for unofficial conversions.
http://rpg.stackexchange.com/questions/23215/magic-the-gathering-rpg is quite good as well if you look further down the page to the answer that quotes Ryan Dancy.

There are a lot of cool ideas in M:TG, much of which is inspired by the artwork. Most of those ideas are monsters of one sort or another. For example: 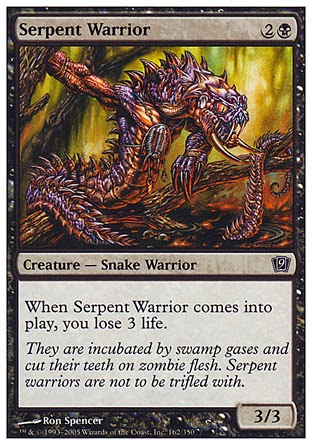 These creatures are found in swamps and jungles, particularly around desolate ruins of fallen civilisations, and are ferocious enemies of mankind. Sages speculate they were created by an elder race of serpent-creatures called the Yuan-ti.
In combat they are fast and deadly, preferring teeth and claws to artificial weapons. They can create darkness in 10’ radius around their bodies once per day for 10 rounds and they will use this to surprise opponents. If they successfully bite an opponent, they inject a venom - the target must save vs poison or suffer 1d4 damage per hour for a whole day (24 hours). Serpent warriors are willing to cooperate with other evil reptiles and sometimes have lizardmen and troglodytes as slaves or foot-soldiers.


These weird and terrible creatures are a fusion of elemental fire and the planes of Chaos, and can be found in either place. They can also be found in volcanic areas on the Material Plane, including lava caverns of the Underworld. They are occasionally found alongside fire giants, efreet and red dragons.
Firefiends have vents on their back that unleash red-hot gasses once an hour and they may, in addition to attacking normally, unleash a burst of flames and hot gases that cause 2d6 fire damage to all within 10’ of the creature and 1d6 to anyone from 10’ to 20’ of the creature.
Furthermore, on dying, a bogardan Firefiend unleashes one last burst of flame that does 3d6 to all within 10' and 1d6 to anyone from 10' to 20' of the firefiend.
Posted by John L at 13:12