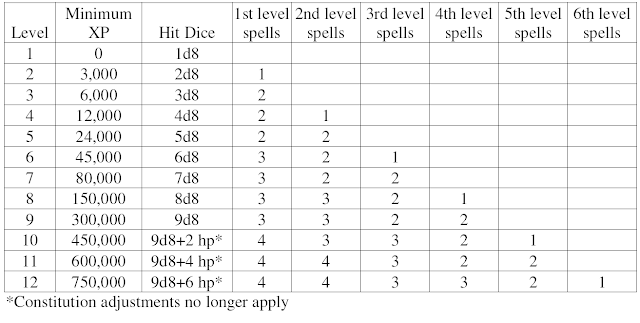 Requirements: Wisdom 9+, Constitution 9+
Restrictions: Cannot use edged or pointed weapons. Dwarven clerics choose from the same list of weapons as human clerics except for staffs, which are too long for dwarves to use properly in combat.
Armour: Dwarf clerics can use any armour and any shield.
Alignment: Dwarven Clerics must be Lawful, Neutral or Chaotic - they cannot be unaligned.
Saving Throws as Dwarf fighter of equal level
Roll to Hit as human Cleric of equal level
Racial Abilities:
Infravision – All dwarves have infravision out to 60ft in the dark.
Detection: Dwarves detect stone-based traps and unusual stonework on a 1-2 on 1d6 when actively searching
Class abilities:
Spells – Dwarf clerics have access to the same spells as human clerics and select and prepare them each day in a similar way. 1st level dwarven clerics do not receive spells as they are still proving themselves worthy.
Dwarven clerics cannot turn undead.
Dwarven clerics hold an important position in dwarven society, being the only spellcasters. That they are also the servants and messengers of the gods of the dwarves reinforces their importance. They often act as advisors and counsellors, though rarely do they directly wield political or military power. Dwarven clerics are quite rare – only 1 in 100 dwarves undergo clerical training in a temple of their deity of choice, and not all of those succeed in becoming acolytes. Those that succeed are given the same weapons training as human clerics.
The most notable difference between dwarven and human clerics, apart from race, is that dwarven clerics have no significant power over the undead, whereas human cleric can turn or destroy undead. Philosophers speculate that this is because most undead originate from dead humans rather than dwarves, and dwarves don’t encounter as many undead as humans do.
Dwarven clerics go adventuring for similar reasons as human clerics, namely to spread the word of their deity, to act as the strong arm of their church or sometimes to gather treasure to fill the church coffers.
Dwarven clerics are usually lawful in alignment. Neutral ones tend to focus on practical and material things rather than philosophy or morality. The very few chaotic ones are either covert cultists, corrupting and subverting the dwarven communities around them or pariahs, outcasts who have fled or have been banished from their clans, usually on pain of death.
Posted by John L at 11:37