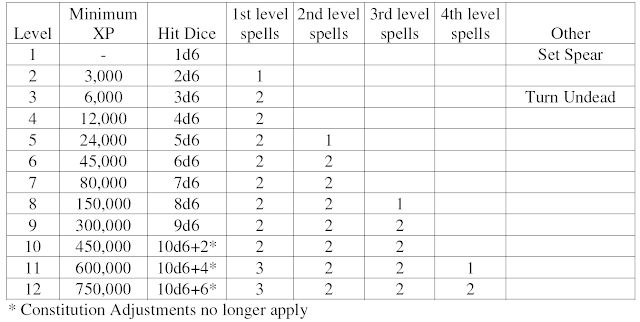 ﻿
Requirements: Str 9+, Dex 9+
Alignment: Always Lawful
Armour: Any + Shield
Weapons: Any one-handed melee weapon except lance, plus any missile weapon except longbow and heavy crossbow
Furthermore, the following weapons cannot be used with just one hand by halfling defenders. In effect these become two-handed weapons: Spear, Longsword, Bastard Sword, Mace, Warhammer, Trident
Racial Abilities: As halflings, halfling defenders have the following abilities:
+1 to initiative
-2 to AC vs large opponents.
Class Abilities:
At 1st level, halfling defenders can set spears against charging opponents as fighters do. Spears are still 2-handed weapons for halflings using this ability.
At 2nd level, halfling defenders can use spells in a way similar to clerics.
At 3rd level halfling defenders can turn undead as if clerics of 2 levels lower.
The halfling defender's spell list is smaller than normal clerics and progression is slower, but this is offset by the halfling defender’s wider range of weapons, including potent missile weapons, making the halfling defender not so much a halfling cleric as a halfling fighter/cleric.
Note that Cure Moderate Wounds functions as Cure Light Wounds but heals 2d6+2 damage.
Description:
Halfling defenders are the doughty protectors of halfling communities, as well as the healers of sick and injured halflings. They have some commonality with human and dwarven clerics, and some taller folk mistakenly call them halfling clerics. However, halfling defenders rarely form or join organised religion; instead they follow the philosophy of Law in an informal but sincere way.
Halfling defenders are happy to ally with other races and classes – they find dwarves easiest to get on with, but can also work with humans and elves. Among humans, lawful fighters and clerics have the most in common with halfling defenders, and some defenders attach themselves to human churches of lawful gods.
Should a halfling defender cease to follow the path of Law, and unrepentantly behave in an evil or chaotic way, they lose their spells and the ability to turn undead. They retain all their fighter-like weapon training and skills (THAC0 and hit points stay the same).
Posted by John L at 18:47