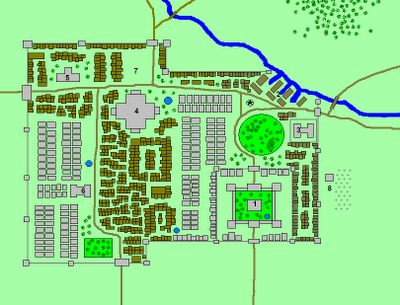 Features of Interest:
1)      The Citadel and Royal Keep
2)
3)      Magical College
4)      Cathedral of Rhondus
5)      Guildhall
6)
7)      Grand Market
8)      The Graveyard
An overview of Thaldion
This is the largest settlement in Teiglin, (see the map of Teiglin for where Thaldion fits in) and the only true city. It has a population of 16,300, mostly human but with some of each of the demihuman races. The city is enclosed in a great wall and is dominated by two great buildings - the Citadel and the Cathedral of Rhondus. The city is a mixture of carefully-planned Imperial architecture and haphazard, individually-built common houses.
The city started out as a base for Toutian colonizing of the Teiglin Peninsula (back in 890 BY), and both the citadel and the city walls date back to that period. Due to its strong defences it came through the Wars between the Empires intact and when the Summoning happened and Erkhart was ruined by Bhael, Thaldion was the natural alternative, and so the surviving members of the ducal government moved to Teiglin.
A lot of refugees also followed them, and the south-central quarter is crowded and impoverished with both the original refugees and their children.
Posted by John L at 14:41