Dungeon of the Month October 2012

The Fungal Caverns
This is a short adventure using the B/X D&D or Labyrinth Lord rules, for characters of levels 4-6 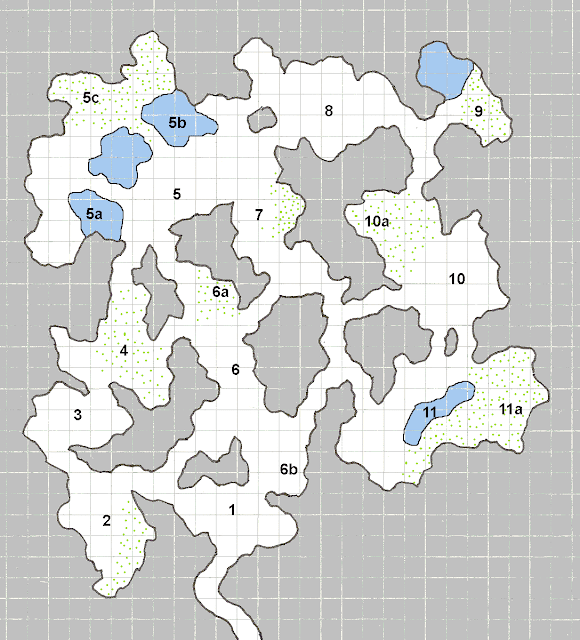 This is a corner of the Underworld, relatively close to the surface. It benefits from several small aquifer springs that supply the pools on the map with a steady supply of water. This in turn allows numerous fungi to grow in the caverns (shown on the map as green dots), giving the caverns their own ecosystem.

The PCs may find themselves in the caverns for a variety of reasons: they got lost, they are curious or they have been sent there to collect samples of strange fungi not seen on the surface, or to look for a dwarven cleric who has been missing for quite a few months.

2) 8 cave locusts (also known as Subterranean Locusts in LL, hp 3, 10, 12, 10, 8. 7, 8, 10) feeding on a large patch of fungi. Anyone entering the patch of fungi will cause the locusts to panic, jumping about into the party and spitting at anything non-locust.
The patch of fungi includes several large goldencaps and cave clover.

3) 2 Tarantella spiders (hp 25, 20). Unlike some tarantellas, these specimens can climb on walls and ceilings with ease (90'). They will be encountered on the ceiling of this cave, among the stalactites. They will attack anything that looks vaguely like prey. Among the remains of partially devoured white apes and fire beetles there is a deceased dwarf wearing dirty but serviceable leather armour +2 and has a  non-magical silver and garnet ring worth 400gp and a silver and jade necklace worth 600gp. .

4) 7 white apes (also known as albino apes in LL, hp 9, 18, 31, 21, 22, 17, 17) browsing on the fungi, particularly goblincorn. There are also 4 young apes (hp 3, 4, 2) which are non-combatant. These apes are defensive and will only attack if they feel threatened. If the PCs enter the area but do not attack or approach too close the apes will hoot and grunt and the dominant male will beat his chest, but the apes won't attack first.

5) The Grand Cavern. This area has a high, vaulted ceiling with large stalactites and stalagmites. There are several sub-areas.
5a) 3 gray oozes (hp 10, 7, 10) all lurk in this pool. Anyone either entering or touching the water will be attacked. The oozes have gradually digested all metal and organic matter of their prey, leaving just minerals. In this case these are 4 topazes (worth 800gp, 400gp, 300gp and 150gp), 3 rubies (worth 1600gp, 750gp and 500gp) and 2 aquamarines (worth 200gp and 150gp)
5b) 1 giant python (hp 22) lives in this pool. It will ambush anyone approaching it except Meldrew the dwarf cleric.
5c) 1 dwarf cleric, 4th level. Meldrew got lost in the underworld and has somehow wound up here. He would very much appreciate any help getting back to his clan (XP value could be for rescuing rather than killing him). Meldrew has spent at least a year underground, and has lost his mind a bit, though he has not lost his clerical spells. He has used the Speak with Animal spell on a wide variety of inanimate objects and ended up in prolonged conversations with stalactites and fungi. In actual fact he is on good terms with the white apes in area 4, and has persuaded the giant python that he is not edible.
Meldrew has constructed a crude hideout from the stalks of the larger fungi.
Meldrew: AC 8, Move 60' hp 20, THAC0 17, Att 1 warhammer for 1d8+1, Ml 10, Align Neutral, XP value 135xp
Str 10, Int 8, Wis 15, Dex 10, Con 13, Cha 10
Equipment: Warhammer +1, leather armour, wooden holy symbol, 14sp
Spells: Cure Light Wounds, Protection from Evil, Speak with Animal

6) The Long Cave. This cave, rather than having a proper ceiling, has the two walls sloping upwards to meet each other about 40' above the cave floor.
6a) There are numerous types of mundane fungi at the northern end, including Goldencaps, Greenshrub and Goblincorn. However, there are some nasty surprises hidden in this patch, and only PCs who are looking for unusual fungi have a chance (Int check) to spot 2 shriekers (hp 15, 15) each covered in a patch of yellow mold (hp 4, 7). As per normal the shriekers will begin shrieking if they detect light or movement within 30ft. This will alert both the ochre jelly in area 6b (70% chance to investigate and attack), the adult owlbears in area 7 (50% chance to investigate and attack) and the white apes in area 4 (40% chance to investigate, but unlikely to attack). Any attack against the shriekers has a 50% chance per hit of causing the yellow mold to release its spores in a 10'x10'x10' cube.
6b) 1 ochre jelly (hp 21) is on the wall of this corner. It will lash out and attack any animal or person that approaches.

7) This large cavern smells of guano and rotten meat. It has a high vaulted ceiling and there is a patch of luminous fungi (Cavern Puffballs and Magentastalks) that can mess up infravision. 2 adult owlbears (hp 18, 24) + 3 young owlbears (HD 2, half damage, no hug damage, hp 14, 4, 10). The adult owlbears will fight to the death, while the young ones will try to flee if the parents are slain. The owlbears here have created a nest out of bones, broken pieces of fungi and fur. Buried under the detritus is a sack of 4300gp and a single diamond worth 1500gp plus a Ring of Command Plants (which can conveniently also command fungi).

8) 2 carrion crawlers (also known as Carcass Scavengers in LL, hp 21, 14) are feasting on the remains of 4 white apes they have paralyzed and slain.

10)  2 rhagodessas (hp 18, 20) are climbing along the walls and ceiling of this large cave, and they will attack anything vaguely edible.
a) 6 giant fire beetles (hp 8, 10, 5, 10, 8, 5) are feeding on the cave clover and magentastalks that grow densely in the northern half of this cave. These fire beetles will not attack other creatures out of hand, they will only fight to defend themselves.

11) This cavern is littered with unusual rock formations, including what appear to be statues of an owlbear, two apes and two giant beetles. Poking out of the water is the statue of what seems to be a large crocodile with its jaws agape. Anyone aware that some monsters can turn enemies to stone can work out that these "statues" were once alive.
a) This is a patch of different fungi species, including goldencaps, goblincorn and cave puffballs. Hiding among the fungi is 1 cockatrice (hp 19). It will try to wait until the PCs get in amongst the fungi so that it can get straight into melee where its deadly touch can be used. In one corner of the fungus patch, the cockatrice has made a nest in which it has stashed all its glittering baubles, including 520pp, 1400gp and 2600sp plus a Scroll of Protection against Undead.