Fungi of the Underworld

Fungi are the basic producers of food in the Underworld. All organic life that does not get food from the surface will get its food directly or indirectly from fungi.
There are hundreds of types of fungi, each with its own role in the ecology of the underground. Similar to surface plants, fungi can occupy a range of environments, but generally speaking they flourish when they have both water and soil or fertilizer. Unlike surface plants, the fungi do not need sunlight. Some sages speculate that whereas surface plants draw energy to grow from sunlight, these fungi draw energy from the darkness - the darker it is, the better the fungi grow. 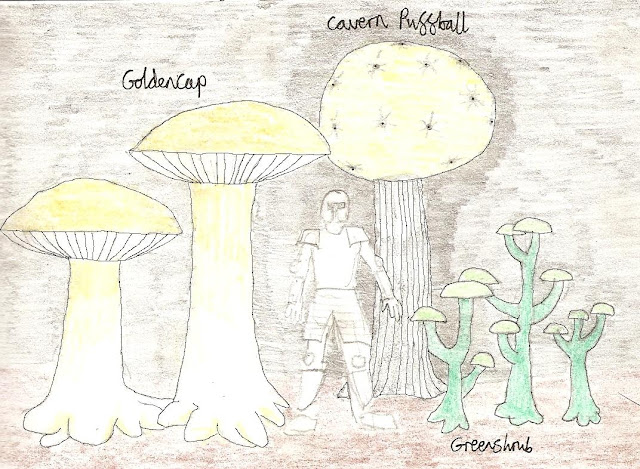 Goldencap is a large, tough fungus that is inedible to humans but eaten by herbivores of the Underworld. When disturbed, it releases a cloud of spores like dust or flour which is irritating but not dangerous.
Cavern Puffballs are often taller than a human. They are inedible to most creatures. but their ball on top of their ridged stalks will glow with a soft yellow light. This will interfere with infravision, but allows humans to see as if in candlelight or moonlight. Some races cultivate it as a form of communal lighting. Also there is a solid core in the heart of the stalk that, when dried and prepared, is similar in strength and weight to a wooden stick. This is very useful in making hafted weapons and tools and even furniture.
Greenshrub looks superficially similar to surface plants and it can grow using sunlight as well as darkness. The caps are edible to humans and the whole fungus is edible to both Underworld and surface herbivores - mules and horses can be fed indefinitely on Greenshrub. 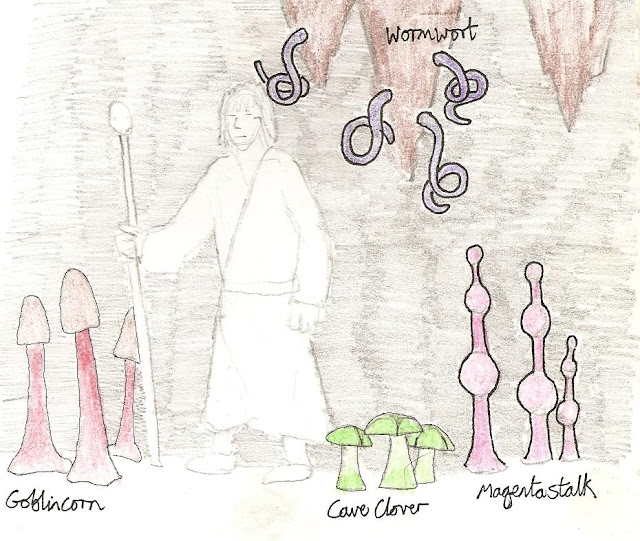 Goblincorn grows easily and is eaten by goblins when meat is not available. Humans and demihumans find it bitter but just about edible. It also has a very useful property in that it absorbs bad gasses and releases fresh air. Other fungi may do this on a lesser basis, but it is quite noticeable with Goblincorn.
Wormwort grows from ceilings and walls in a tentacle-like fashion. It is edible and tasty for humans and many other creatures but gathering it can be a challenge. Dwarves know how to use Wormwort in brewing their own ale when surface barley and hops are not available.
Cave Clover is common fodder for herbivores. Its cap is split into three or four sections by deep clefts. It is quite hardy and can survive in drier caverns with less nutrients than other fungal species. It is often on the outskirts of fungal forests or in patches on its own.
Magentastalk is inedible but when dried its tough fibrous stalk can be used to make a rough, hemp-like rope. It also glows with a pinkish light about the same intensity as candlelight or moonlight.