The Walruses of Walrus Channel 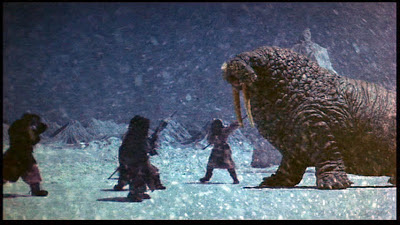 These animals are not normally aggressive towards humans. They are marine mammals similar to seals and sealions, and they feed on crustaceans that dwell on the rocks of shallow, cold seas such as the Walrus Channel. Normal walruses will try to escape into the sea if possible rather than fight, and will only pose a threat if cornered. Giant walruses are less easily scared, and if faced with just one or two humanoids, the walrus may well decide to defend itself. A family of three or four giant walruses can chase off even a polar bear.
Walruses have long tusks (up to 3' long in normal walruses, 6' long in giant walruses) which are used both to defend themselves and fight for mates and also dig holes in the pack ice so that they can breathe when the sea is frozen over. Unfortunately for the walruses, these tusks are good-quality ivory, and are sought after by humans and other intelligent hunters. Normal walrus ivory tusks are worth 1d4 x 50gp each while giant walrus tusks are worth 1d6 x 100gp each. This alone makes them worth hunting, but many hunters are also efficient enough to butcher the animals for their meat (as much as a cow or large pig) and hide (which can be tanned to make effective leather armour). As such they have become an important part of the economy of Walrus City.
Posted by John L at 01:03