This post follows on from Bursia - the Human Empire.
Unlike previous maps of Toutus and Bellenos, I have completely filled in the physical geography.
For ease of comparison the map is to the same scale as that for both the Bellenos and Toutus maps. 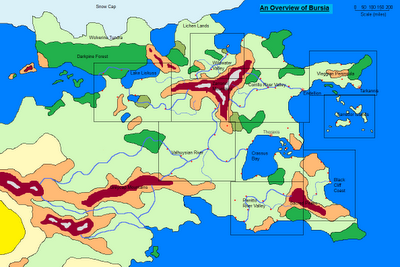 If I have the time and patience, I may detail each boxed region separately in a similar way to Toutus being split up into manageable regions such as Teiglin, Walrus Freehold, and the like.
The red dots are all city-states, though which ones have survived the Summoning and which have collapsed into ruin has not been decided yet. The three metropolises (previously over 100,000 inhabitants each at the height of the empire) are the only three city-states to be named on this map - None have survived the Summoning.