The Western Half of Toutus 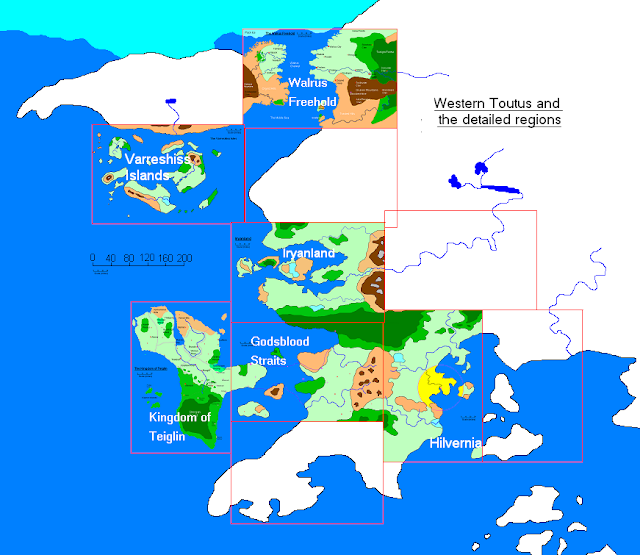 The areas described so far have been part of continent and former empire of Toutus. The above map is not complete, but gives a good idea of how the current regions connect to each other.

The regions described so far include:
The Kingdom of Teiglin
The Godsblood Straits
The Walrus Freehold
The Varreshiss Islands
Iryanland

The regions I have not started describing are
Hilvernia

As you can see, these are works in progress. None of the regions are truly complete, as there are always new aspects, new locations, new characters to be described. Thus although I might introduce a new region one week, I may still go back and describe another part of an older region the next week.

An overview of Toutus:
Toutus is a continent in the northern hemisphere of Kaelaross that stretches from subarctic through temperate to Mediterranean climates. From 6,000 BBY (before Bursian Year 0) the land has been colonized by humans, clashing with or making peace with the resident demihumans who have been on Toutus seemingly since the beginning of the world.
Human kingdoms arose along the southern coast east of Hilvernia from 300 BY to 500 BY and formed a coalition. When faced with a humanoid horde in the north of unprecedented numbers and savagery (at least 110,000 orcs, 50,000 gnolls and 10,000 ogres according to historical sources) these kingdoms formed the Toutus Empire in 722 BY.
The Orc-Head War was bloody and attritional for both sides, but the Toutus Empire survived. Furthermore, the Emperor had shifted the war effort so that the component kingdoms were in no position to break away without permission - they were too exhausted and the bulk of the surviving troops were loyal to the Emperor himself.
The Toutus Empire was a feudal empire, with the Emperor at the top, the kings ruling the old original kingdoms, the dukes ruling over newer colonies (including the newly formed duchy of Teiglin and duchy of Urdus), and smaller counts, earls and barons ruling under them. Along side this there was the Church of Law, which was almost an empire within the Toutus Empire - a collection of the different lawful religions (notably Chelmor, Rhondus and Adonor) forming hierarchies that spread across Toutus, giving spiritual guidance and moral support to the feudal leaders.
The Toutus Empire was also known for its knights in shining armour with their splendid heraldry and their devastating charges with lances. These knights, and particularly their feudal overlords, built magnificent castles as both prestigious noble homes and as fortresses to dominate the surrounding lands.
This all came crashing down in 1560 BY when after 10 years of the Wars between the Empires, the Summoning occurred and the Toutus Empire, along with the three other Empires, ceased to be a coherent entity and collapsed.
Posted by John L at 16:55