Note that the nagpas are not my own creation but are adapted from the module X4 Master of the Desert Nomads.

Nagpas are the degenerate and mutated survivors of an order of magic users who dabbled in chaotic powers beyond their ability to control. They resemble withered, ancient humans with the heads of vultures, and are often dressed in decaying robes that they wore as mages. Nagpas are hateful and malevolent, and seek to use their ill-found powers to dominate or destroy other intelligent beings as well as seeking out more magical power. They are rare, and are found as small groups dotted around the most desolate and barren parts of Kaelaross, far from humanity and civilization. 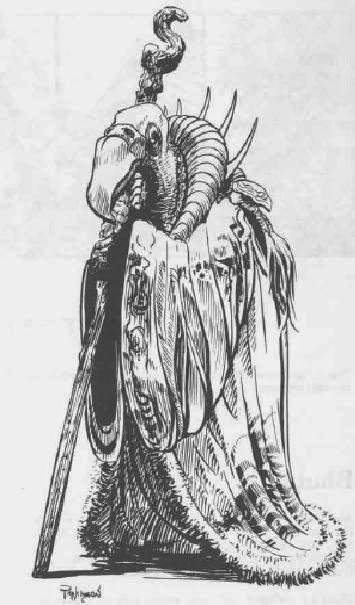 Lesser Nagpas can use the power of Create Flames, causing a burnable object (such as clothes or knapsack) to burst into flames, causing 2d6 damage per round of contact with a creature. They can also use Darkness and Phantasmal Force as spell-like powers, and one magic user spell from each spell level 1 to 3.

Nagpas can use Paralysis (all lawful creatures within 10' of the nagpa must save vs Spells or be paralyzed for 1d4 rounds) as well as Create Flames, Darkness and Phantasmal Force. They may also cast one magic user spell from each spell level from 1-5.

Greater Nagpas can cause Corruption - this will cause a single non-living item within 60' to decay into uselessness. Magic items are allowed a saving throw vs spells as the character using them. They can also use Paralysis, Create Flames, Darkness and Phantasmal Force. They may also cast one magic user spell from each spell level from 1-6.


Nagpa Lords can use the powers available to all other nagpas, as well as the power of Charm Monster as the spell. They may also cast one magic user spell from each spell level from 1-7.

The unspecified magic user spells are all castable once per day and must be memorised as if the nagpa was a magic user. The spell-like powers do not require memorisation and can be cast 3 times per day.
Posted by John L at 13:26