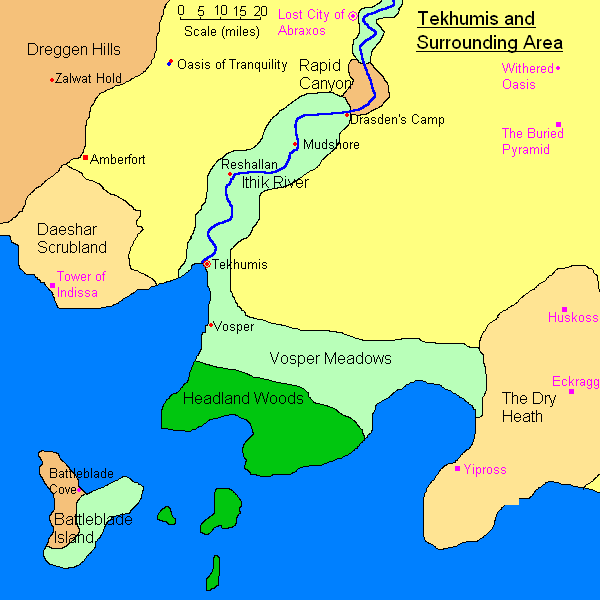 This was an outpost of the Bellenos Empire, far to the south-east of Toutus. Since the collapse of the Bellenos Empire, it has become an independent town, living off trade and riverside agriculture.
Tekhumis is not of Bellenosian founding - it was part of the ancient Cynidean civilization that prospered until the rise of the Bellenos Empire.
The climate is subtropical, dry and quite hot, certainly very different from the cool, wet climate of western Toutus. There are large stretches of desert and semi-desert, almost unknown to Toutus.
There are two main cultures that have settled here, and they have mixed relations. The Bellenosians are sophisticated traders, urbane, materialistic, practical and often greedy. The Shu'aa are esoteric, spiritual and honour-bound.
The Bellenosians have mostly travelled from the heart of the Bellenos Empire to Tekhumis on the outskirts. The Shu'aa have inhabited this land for at least nine centuries - in their oral traditions and legends, they tell how their ancestors broke away from the decadent and corrupt Cynidean Empire and formed their own towns free from the taint of Chaos that was infecting the Cynideans towards their end.
Ruins of the Cynideans are found scattered through the area, and still hold treasures lost for centuries. However, they are not entirely unguarded - there are still many cunning traps, summoned guardian beings and dreaded undead. Some Shu'aa say that there are still pockets of Cynideans still surviving deep beneath the ruins, but this is not taken seriously by the Bellenosians.
Posted by John L at 12:56