These two villages sit outside Walrus City in the Walrus Freehold, and rely on the city for trade, communication with the outside world and military support when there is trouble. 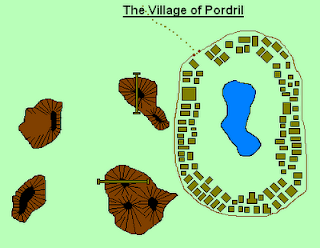 The Village of Pordril is a mining village of 800 people located east of Balkint and southwest of Walrus City. It sits around a pond that is used for keeping ducks and geese by the villagers, and it has a series of large sinkholes right next to it, leading to a network of caverns. These caverns hold the mineral wealth that the miners are after. Unfortunately, the caverns also connect to the Underworld, and so monsters will occasionally wander into the mining caverns and cause havoc among the miners.
Above two of the sink holes, the villagers have constructed winching mechanisms with large crossbars, effectively acting like the winch for the bucket of other villages wells, except that instead of bringing up water, it brings up miners and ore, and sends down equipment.
The caverns hold a number of different minerals including copper ore, malachite (some of which is quite pretty), tin ore and various sorts of quartz, including blue quartz and crystal clear quartz. These are all exported to Walrus City and though the
Although there is some herding (sheep and goats) and hunting, Pordril imports a lot of food especially flour and dairy products, so keeping the road to Walrus City is important.
The village is not heavily defended - there is a wooden palisade and a single gate. The village militia is usually 20 strong at any one time, but it can be raised to 120 in times of real emergency. 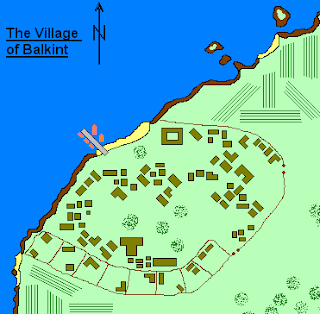 Balkint is a fishing village on the shore of the Walrus Channel, southwest of Walrus City. It is an uninteresting village, with a population of 650. There is some barley grown on the long strip fields just outside the village, and inside the palisade on the south side there are a number of enclosures for farm animals including cattle, sheep and horses so they can be protected from predators.
One feature of interest is the large rectangular building on the north side of the village next to the beach - this is the Library of Khazep. During the wars between the Empires, a number of priests and clerics of Khazep realised that their precious books were vulnerable in the event of enemies sacking the cities around Toutus where their books were held. They therefore decided to take a number of key books from the main cities and move them to this small, isolated village which was unlikely to be attacked, while still keeping them relatively accessible to those who wish to read them.
The library of Khazep includes great works of art and literature, as well as theological and arcane tomes that could be used for personal power. As such, the library could become the target of theft or even outright looting should people realise just what sort of books the Library of Khazep holds.
Posted by John L at 14:58