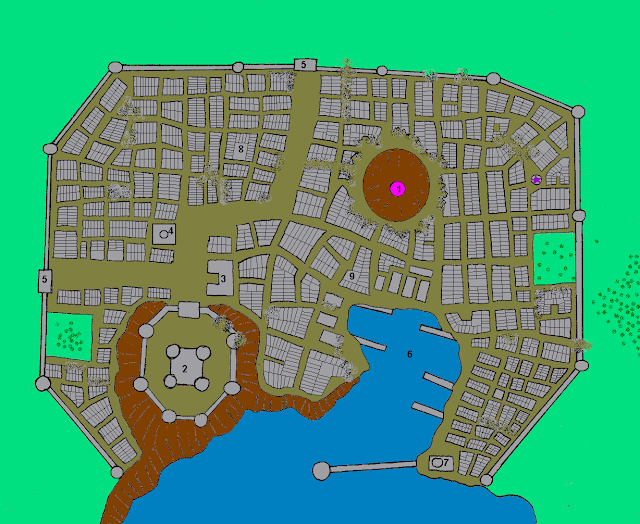 
Erkhart, the former capital of Teiglin, has been abandoned by humans and demihumans after the chaotic god Bhael created a Chaos Portal in the middle of it. The Chaos Portal is a link to Hestoris, the First Plane of Chaos. The majority of chaotic creatures that have come through the Chaos Portal are humanoids, including goblins, orcs, hobgoblins and gnolls. The goblins in particular are well-organised for chaotic creatures, and are led by very dangerous goblin warriors and shamans.

Once Erkhart was a great and powerful city, a bastion of the Imperial might of Toutus with a population of 50,000 and the hub of trade routes stretching across the continent. Now all sorts of chaotic monsters roam the streets and make lairs in the ruined buildings.

The city was famed for its narrow houses, shops and workplaces crammed side by side into blocks. The majority of the buildings are intact, but there are areas of devastation where monsters fighting either the hapless human defenders or fighting each other have wrecked large portions of city blocks. These ruined areas of rubble occasionally block the streets.

The most notable features are numbered on the map:

What cannot be seen is the underbelly of the city - sewers, catacombs and cellars. They form a series of interconnected labyrinths underneath the surface city which the monsters have been quick to inhabit. The goblins, in particular, hate sunlight and prefer living underground. They are also competent miners and when marshaled by strong leaders they are capable of extensive tunneling, expanding the existing underground structures of Erkhart.
Posted by John L at 14:06