The Barony of Thaldion is in the heart of the Kingdom of Teiglin and is named after its main city, the capital of Teiglin. The Barony of Thaldion is under the King's direct control - it is his own personal barony, and it is probably the wealthiest in Teiglin. Only Brandir and Luthien approach it in prosperity. Part of this is the large numbers of people - 41,000 folks live in Thaldion Barony (including the 16,300 in the city of Thaldion), mostly human but with 3,600 halflings as well. 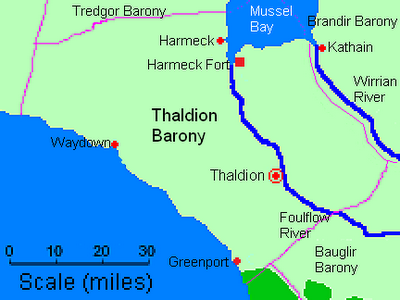 The barony is strategically in a vital position, at the kingdom's narrowest point and splitting the Teiglin land mass in two, separating Alvenir and Tredgor from the other realms. It has access to both the southwest coast and Mussel Bay, and there is plenty of merchant traffic passing through it at any time.

Greenport is a small trading port and fishing village that sees traders passing through on their way to both Thaldion and Glensor. The elves of Glensor don't have a proper sea port of their own, so Greenport is the nearest and most convenient. Greenport has 900 villagers (650 humans, 100 halflings, 150 elves), almost a town but not quite. This relatively small size makes it less threatening to the elves, some of whom are not comfortable in big cities such as Thaldion city.

Waydown is a fishing village of 540 people at the bottom of a steep series of cliffs. It would be barely worth mentioning, but the cliffs are inhabited by giant seagulls that are proving to be annoying and possibly dangerous pests, attacking pets and small livestock and then swooping off to their inaccessible cliff ledges. Anyone capable of dealing with these avian pests would be rewarded by the villagers - there is already a talk of a 10gp bounty on each gull head but the village council has not yet approved this.

Harmeck is a small town on the shore of Mussel Bay, with a population of 1670. Its numbers are swollen by the families of soldiers posted at Harmeck Keep, as well as those who provide services to soldiers (tavern keepers, entertainers, blacksmiths, ladies of the night and so forth). Aside from trading with the garrison, there is a small fishing fleet and numerous sheep and dairy farmers on the outskirts, as well as docks for cargo ships to load and offload wares.


Harmeck Fort is the headquarters of the Royal Army of Teiglin. It is a concentric castle with numerous barrack buildings and training grounds and also doubles as a prison for those suspected or guilty of serious crimes. At any one time it typically has 500-600 soldiers and officers present. Harmeck Fort is on the estuary of the Foulflow River (and is nicknamed Foulmouth Fort - a reflection on some of its coarser inhabitants as well as its geographical position) and there is a wooden pontoon bridge across the river that the soldiers maintain. This bridge allows easy access to the town of Harmeck on the other side, but could easily be burnt or cut loose if someone tried.
Posted by John L at 17:00