The Island of Lost Souls

One of the most spectacular results of the titanic battle between Bhael and Rhondus and Adonor was the emergence of the Island of Lost Souls from the sea bed at the same time as the Urdus Isthmus sank beneath the waves, forming the Godsblood Straits.
The village of Tearfall is remarkable in that although it was shaken violently and rose up and down, it was not submerged - instead it found itself with the sea on the other side of the village. The fishing boats to the south were stranded high and dry, while livestock and outlying farms drowned to the north.
These days there are 260 folks in Tearfall, and the buildings are in a ramshackled state - there is precious little timber to rebuild with, and many tools for carpentry and masonry have been washed away. 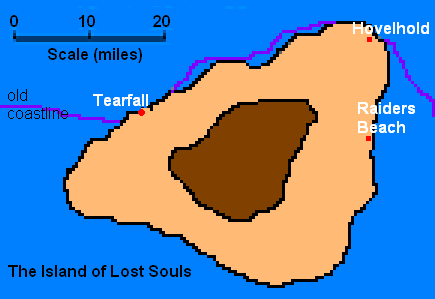 The island is not very fertile and there are still some very salty areas where the rain has pooled rather than washed away the salt. There are enough shrubs and shore plants growing on the rocky slopes for the folks of Tearfall to keep a herd of goats and try to grow some vegetables.

On the east side of the island a band of chaotic marauders have established a base, Raiders Beach. The core of the raiders is a company of 50 Traitor Legionnaires (human soldiers who have turned to Chaos) led by the notorious Captain Morbius but he has also brought over a number of gnolls and ogres as extra muscle from the Chaos Portal in Maquosmouth. Raiders Beach is currently a collection of huts surrounded by a crude stone wall, but Captain Morbius has grand ambitions of creating a mighty fortress of evil. To do this, he is looking for slave labour.

Hovelhold is a collection of huts built from wood salvaged from shipwrecks. The inhabitants (about 65 humans and halflings) are survivors of the Summoning and the sinking of the Isthmus. They live in fear of the warlike inhabitants of Raiders Beach and know it is only a matter of time before they are discovered and attacked. If civilized folks make contact with Hovelhold, they will beg to be taken away to a safer place.

The mountains in the centre are barren and mostly empty, but a flock of harpies has taken over the highest peaks. They are particularly hated and feared by the Tearfall villagers as the harpies have taken and devoured almost a dozen villagers, including an armed expedition that tried to battle the harpies.

The shores surrounding the Island of Lost Souls are populated by harmless wildlife, including seals, normal crabs and sea birds. However, there are some other creatures that could pose a threat - giant crabs, giant skuas and placodonts (sea-swimming reptiles with characteristics of manatees and turtles).
Posted by John L at 16:11